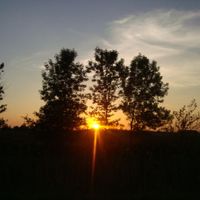 From the recording When I Think of Home

It’s cool (by Puerto Rican standards) outside,
But hot, hot, HOT inside.
Coquís, tiny tree frogs forming a chorus after rain.
It’s lovely and I know I’ll miss it if I ever leave.
But it’s not home.

I am not home

I liked roaming the fields,
Making up stories
About little people
Living in forests of alfafa.

I liked bringing the cows to the barn for their mid-day drink of water,
And observing their “pecking order”,
As the more docile cows waited their turn for water.

After supper, I looked forward to taking my dog, Prince, along
To round up the cows.
(My father never believed me,
But Princie did accomplish this feat,
One time!)

I also enjoyed standing at the gate, calling,
“Come, bass”.
Some of them came, sometimes.
Mostly, not.

My heart swelled as I contemplated the sun setting
Over the area of the parcel that we called “Cuba”.
(All we knew was that a man had lived there
And had put up a sign over his door that said: “Cuba”)


I remember the summer that I tamed wild tigers
Born high in the Haymow.
All tigers became loveable and docile kittens,
And eventually vicious mousers.

I may be-I am- far from Wisconsin, but my heart is still in Wisconsin.
It’s my Wisconsin and I’m home…
And I’m home…

Who, despite an eigth-grade education,
Was not only literate
But who knew when to plant and harvest crops
At just the right times.
Edgar Wille, Edgar Wille

And who, though not an agronomist,
Understood the benefits of crop rotation
And the appropriate use of manure.
Edgar Wille, Edgar Wille

And who, though not meteorologist,
Knew each cloud,
And what it could, and could not do.
He knew tomorrow’s weather
Better than the men on TV.
Edgar Wille, Edgar Wille.

He was, in his own way, a naturalist
Who would pause from his work
To observe the migration of geese.

He also would report
On the sighting of a fox,
Deer (not so common then),
Or a garter snake, sunning itself on a rock.

He was not an agronomist,
He was not a meteorologist.
He was a naturalist.
Quite literate
In the reading of Word,
Crop,
Soil,
And cloud.

And I remember my mother, Esther Wille

I remember my mother, Esther Wille,
And I remember the excitement of the first day of Ozaukee County Fair.
Waiting until early morning, to pick fresh flowers for the competition,
She would fill the basement with zinnias, marigolds, petunias and more.
I can still recall the scents…

She also entered canning.
Sadly, one year her blue-ribbon peaches were stolen.
(Yes, there was crime, even back then)

Her dill pickles, cherry dills, bread and butter pickles,
And others, won so many prizes that a reporter from the Milwaukee Journal
Came to our farm to interview her.

I remember my mother Esther Wille.

There are other memories,
But, mostly I remember the land,
The gentle inclines,
The low spots, and the higher spots
With a view of the woods,
And the steeple of Trinity Lutheran Church
Freistadt
Beyond.
Our Freistadt,
Beyond.

When I think of “home”,
I think of the land,
Fifty-eight and a half acres, on Wauwatosa Road.

I feel the land beneath my feet.
I become aware of the alfalfa and the oats
As they brush against my legs.

I smell the aroma of freshly cut hay.
I again experience the pungent dampness of the cow’s breath
And I remember the dust in the lane
As the cows trudge towards the barn.

I may be-I am- far from Wisconsin, but my heart is still in Wisconsin.
It’s my Wisconsin and I’m home…
I’m home.